Rate Forecasts are dubious in the best of times, let alone  these times! 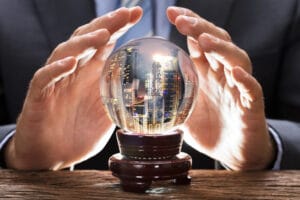 Weighing all the economic factors at play is enough to put anyone in a haze.  Rate catalysts are seemingly endless, including:

Mix all these factors in and you have nothing to help pick a mortgage term with confidence.

But there was little change of the happening this time.  Look at the spread between RBC’s 5-year bonds and the Government of Canada’s 5-year bond. 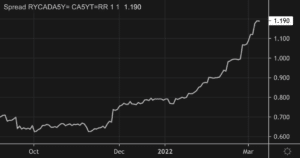 RBC is just as credit worthy and well-capitalized a company as you’ll find in Canada.  Yet, the market has been forcing it to pay increasingly more to borrow.

Banks can’t ignore such phenomena when pricing fixed rates because it impacts their funding costs, despite the sizable dip in government yields.  For the foreseeable future, bond yields should continue influencing fixed rates as asymmetrically – meaning, if yields shoot up, fixed rates will shoot up.

As rate observers try to predict the BoC’s(Bank of Canada) terminal rate (where they stop hiking), many will look to 2018 as a guide. (That was when the overnight rate last peaked at 1.75%)

Since then, household debts have grown increasingly.  They have become more sensitive to rates and endured skyrocketing prices.  Looking at this, you might expect rate tightening to short-live, but this is not all that has changed.

The BoC has been progressively qualifying tis characterization of inflation expectations.

Canada is now battling an inflation crisis.  There is no other way to describe it when gas prices are at $2 a litre.  Average incomes can’t afford average homes and 60% of Canadians have trouble affording groceries.

The spread between core inflation and the overnight rate galloped into March at almost 300 basis points.  That is the highest ever, based on Bank of Canada data going back to 1990.  It confirms one thing clearly.  Rate are too low and using history as a guide, they’ve been too low for some time.