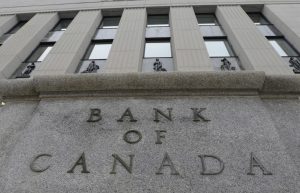 The Bank of Canada held the target overnight rate at 1.75% for the sixth consecutive decision this week and showed little willingness to ease monetary policy, as stronger domestic growth offsets the risk of mounting global trade tensions.  There has been ongoing speculation that the Bank of Canada would be pushed into cutting interest rates by the Fed.

Dr Sherry Cooper, Chief Economist of Dominion Lending Centres says, I do not believe the Bank will let the US dictate monetary policy when the Canadian economy is clearly on the mend.  To be sure, trade tensions have slowed the global economic outlook, especially in curbing manufacturing activity, business investment and lowering commodity prices.  But the Bank has already incorporated these effects in previous Monetary Policy Reports (MPR) and today’s forecast has made further adjustments in light of weaker sentiment and activity in other major economies.

The Governing Council stated in a press release that central banks in the US and Europe have signalled their readiness to cut interest rates and further policy stimulus has been implemented in China.  Thus, global financial conditions have eased substantially.  The Bank now expects global GDP to grow by 3% in 2019 and to strengthen to 3.25% in 2020 and 2021, with the US slowing to apace near its potential of around 2%.  Escalation of trade tensions remains the most significant downside risk to the global and Canadian outlooks.

The Bank of Canada released the July MPR earlier this week, showing that following temporary weakness in late 2018 and early 2019, Canada’s economy is returning to growth around potential, as they have expected.  Growth in the second quarter is stronger than earlier predicted, mostly due to some temporary factors,including the reversal of weather-related slowdowns in the first quarter and a surge in oil production.  At the national level, the housing market is stabilizing, although there remain significant adjustments underway in BC.  A meaningful decline in longer-term mortgage rates is supporting housing activity.  The Bank now expects real GDP growth to average 1.3% in 2019 and about 2% in 2020 and 2021.

Bottom Line:  The Canadian economy is returning to potential growth.  “As the Governing Council continues to monitor incoming date, it will pay particular attention to developments in the energy sector and the impact of trade conflicts on the prospects for Canadian growth and inflation.”  With this statements, Governor Poloz puts Canadian rates firmly on hold as Fed Chair, Jerome Powell signals openness to a rate cut as uncertainty dims the US outlook.

The Canadian central bank is in no hurry to move interest rates in either direction and has signalled, it will remain on hold indefinitely, barring an unexpected  exogenous shock.